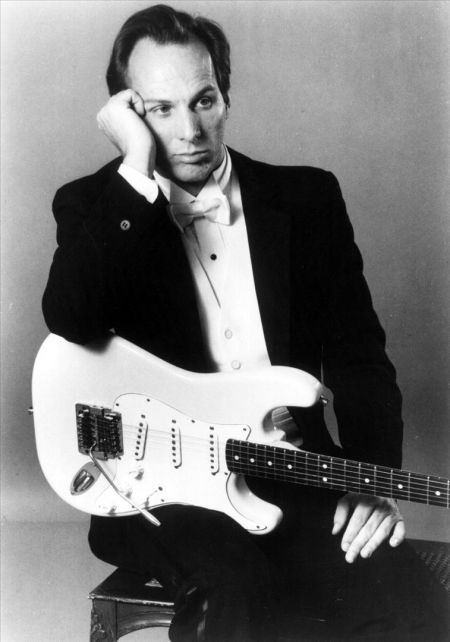 UNLIKE JOHN COLTRANE JIMI HENDRIX DID NOT PRODUCE MANY OFFSPRING. WHY IS A TOPIC FOR another discussion, but among the very handful of reasonable successors to the throne of the electric guitar’s innovators is one Robert Steven “Adrian” Belew. Whereas Eddie Van Halen continued Hendrix’s technical legacy, pushing it even more forward(while all the while ludicrously pretending Eric Clapton was a bigger influence upon his playing) and Stevie Ray Vaughan shamelessly imitated the stage moves of a guitar hero(playing with his teeth, playing the guitar behind his back or between his legs) and recreated his blues-rock tones, Belew used Hendrix as a jump-off point for sonic expressionism. Like his idol, Belew utilized noise and other atonal tones as impressionistic/improvisational rockets for his imagination. Belew took up Hendrix’s challenge that the electric guitar need not sound like an amplified acoustic guitar but an entirely new instrument in and of itself. Both recognized the past yet refused to be rigidly tethered to it. Thus Hendrix played the blues “as if he were born on Saturn” while Belew’s guitar seemed to belong as much to the animal kingdom and the industrial din of machines, all with a mad hatter’s exuberance.

Not bad for a kid from Covington, Kentucky–which isn’t exactly Seattle. I know Covington, and it is an interesting city, especially with its historical relationship to Cincinnati, directly across the Ohio River. But that’s for another discsussion. He worked himself up the musical food chain, from Holiday Inn gigs around Northern Kentucky, Cincinnati and Southern Ohio to Nashville, where a chance encounter with Frank Zappa catapulted him into becoming the most interesting and innovative guitar sideman of the late 1970s and early ’80s. Not that Belew has stopped since then, although he has largely devoted himself to a solo musical career, producing other artists and being very involved in the guitar making and signal-processing wings of the music industry.

So hoist a Jim Beam Black or Woodford Reserve for the 70 year old. He’s earned it. Here is a 7 song playlist of essential Belew-ism which has continued to slay me for the better part of four decades, listed in alphabetical order(his “bosses”):

“BOYS KEEP SWINGING” from the album Lodger. The last entry of the so-called “Berlin Trilogy,” although the album was actually recorded in Montreaux. One of Bowie’s greatest songs(and videos) merits the buzz saw white noise Belew unleashes at the end.

“Station to Station”(live)-from Stage. Though Bowie had dismissed his darkest creation “The Thin White Duke” a few years beforehand, this stellar live cut is all phoenix. The opening instrumental crescendo, whether the studio original or live versions, was said to be summoning up the historic terror of European Jews inside cattle cars being sped to concentration camps, to no remorse from the neo-fascist character Bowie spun like a spider through the.webs of cocaine he had been snorting circa 1974-75.

The build-up here in this 1978 version is almost unbearable. Nearly 5 minutes of whooshing train sounds, of a German cabaret polka gone horribly wrong, the violinist’s pizzicato like anxious Nazi fingers awaiting the arrival of victims. To this macabre cacophony Belew adds squalls and squalls of feedback, which could easily substitute for real human voices wailing in fear, trepidation and agony. Just as Hendrix’s “Machine Gun” and his deconstruction of “The Star Spangled Banner” convinced listeners his guitar was summoning up the sounds of the Vietnam War, this rendition of “Station to Station” is as cinematic and visceral. Later Belew takes a solo which is understandably more restrained—although it might remind you of Chuck Berry if he had taken acid after seeing Hendrix in ‘68 or ‘69.

The last/latest incarnation of Robert Fripp’s King Crimson group, a reintroduction and reconfiguring of the lineup after an absence of seven years. Although the long running English prog rock group had always been little more than a cult band in America. But Belew being asked to join Fripp’s band was treated like a media event that is all but unimaginable now. Featured articles, covers of magazines, some mainstream-ish TV appearances. Increased sales.

This was an all-star project that lived up to the hype of the two most prominent Bowie guitarists pairing up, of their divergent musical sensibilities colliding—then coalescing.

“Elephant Talk” continued Belew’s fascination with mimicking animal sounds, spreading the tusks across an odd funky track. Lifting title and mood from the well-regards Paul Bowles novel of the same name, “The Sheltering Sky” is all faux-Orientalism, a pastiche of “Arabian” music as old as Debussy and silent film scores. Music vaguely Middle Eastern, but more an European romanticized evocation of said music, a fantasia upon suggested sounds. In other words, phony. Yet I still love it. As a young punk I was fascinated by Belew & Fripp’s usage of guitar synthesizers—which is now as highly dated and evocative of ‘80s music as gated reverb and Linn drum machines—to capture sonic textures once reserved for keyboards. Now a middle-aged wanker I adore it as a guilty pleasure, a gauzy strip of muslin discovered in a vintage hard back book which someone once used as a book mark. (‘Tis a pleasure; I refuse to feel “guilty” about anything.)

That the industrial/art/experimental/rock auteur Trent Reznor sought out Belew to add a starting block of clay for his sampling/remixing/processing purposes revealed a lot about Reznor’s tastes and knowledge of musical history(heavy on Bowie, of course). Alas what should have been a flowering long-standing collaboration was not meant to be. The dreaded “creative differences.” Thank goodness it happened at all.

6.“The Great Curve”(live) from The Name of this Band is Talking Heads.

No offense against Remain in Light and Fear of Music—brilliant, seminal albums—but only when the Talking Heads shed Brian Eno‘s studio influence and expanded into a “big band” for their live performances did they begin to approach anything truly resembling Fela’s AfroBeat. On the excellent, then career-spanning live double album they sound like they are within one football pitch of capturing a typical Fela corker like “Unknown Soldier” or “Original Sufferhead.”

“The world moves on a woman’s hips,” they shout joyously over and over, a paean to universal motherhood over a gallop which begins in Africa and thunders across the Atlantic Ocean towards lower Manhattan. Belew’s two solos command the language not of Yoruban but free jazz, saxophonic squalls as deliriously happy as the music existing before and after it. Tone and key are discarded for the bliss of what he’s playing and what we’re hearing. And while it parallels his playing in the intro to “Station to Station,” that darkness has been swapped for the eternal burning flame of optimism.

I think of these as one track because of the nearly continuous sequence I first heard on cassette tape. I fear that “Genius of Love”–one of the great pop singles of the Eighties–is now better known as a sample for Mariah Carey’s “Fantasy” than for its own importance. This fluke dance hit from half of the Talking Heads rhythm section(husband and wife duo drummer Chris Frantz–also a Kentuckian, born in Fort Campbell–and bassist Tina Weymouth) plus two of Weymouth’s sisters on backup vocals was a perfect compliment to Blondie’s hit single(and conversation piece), “Rapture.” I LOVE Blondie and I LOVE “Rapture” but it’s so fittingly American that “Rapture” has the distinction of being the first “rap song” to reach No. 1 on the charts. Not “Rapper’s Delight,” not Kurtis Blow, not Grandmaster Flash and the Furious Five. America. You can’t make this shit up, hard as you try.

Blondie and Talking Heads both hailed from the CBGB club scene in 1970s New York, known more as a punk rock club, yet both bands were “New Wave” from their debuts. Both bands achieved considerable mainstream success. And both were all-white bands with a sincere love of Black musical forms which came to dominate their original sounds as the bands evolved.

The eponymous Tom Tom Club album flirts with other sounds but is thoroughly endebted to Black rhythmic impulses heard in disco, funk, rap and hip hop. “Genius of Love” vocally and lyrically acknowledges their influences in a childlike way which remains thrilling and disarming(just listen to the way the sisters coo about Smokey Robinson and try to capture the disco lilt of [Hamilton] Bohannon). The way the sisters harmonized throughout the album has always reminded me of the children’s choirs used for the “Peanuts” TV specials, which added to its infectiousness.

Belew, listed as the sole guitarist on the track, should be credited for creating one of the funkiest riffs ever. His crispy syncopations and lightly processed tone(envelope filter? ring modulator?) are hooks which compel the song to additional greatness. Maybe the most hummable part Belew conceived on record, too. Jimmy Nolen would be proud. Nile Rodgers and maybe Prince, too.

“Tom Tom Theme” is a too-brief instrumental interlude, yet the calypso-flavored ditty hints at a direction Belew would further develop in King Crimson with “Sheltering Sky.” “L’ELEPHANT” is total filler save for the guitarist’s uncanny imitations of a certain mammal whom obsesses him.

For all this and more. Not bad for a kid from Covington, KY. Happy birthday. Good health and many more.

Happy New Year to anyone reading this.

The Hermit of Mink Hollow.

0 Replies to “ADRIAN BELEW: A 7 SONG TRIBUTE IN HONOR OF HIS 70TH BIRTHDAY”