IT’S VERY TEMPTING TO PROCLAIM SEASON ONE OF THE MANDALORIAN AS ONE OF THE greatest first seasons in television/streaming history. Rewired by the Internet and social media, our collective cyber minds, pop cultural rankings and lists have never been more important. Our responses to everything has been made twitchy because of how we consume technology. Bias is toward the recent not the past, whether recent or distant. Contemplation of something beyond the last five minutes much less the last year–or decade–almost short circuits some of our brains.

Where does The Mandalorian “rank” with other television shows of the “modern” era which amassed as much critical and commercial attention? The generally agreed upon consensus is that the starting point began with The Sopranos(1999-2007), a curious destination because all 86 episodes occurred while the Internet remained in its infancy and social media existed separately as two words that no one thought of yet combining. Dramatic series had been taken “seriously” before it, of course, yet the show became the benefit of both populist obsession and mainstream critical analysis. There was an overlapping agreement between the two camps of its excellence, quality, depth and narrative. The storytelling was proclaimed superior to Hollywood movies. It swept awards shows. Made HBO a “tiffany” network. Even before it ended, The Sopranos had been elevated to the Mt. Rushmore of programming.

Since then The Wire, Breaking Bad, Mad Men and Game of Thrones have been elevated to that plateau even before their runs had ended.  Current television shows in the running appear to include Billions, Fleabag, Succession. What all of these shows have in common is that very early in their runs they stood out from the crowd of their competition, their qualities sparkled beyond compare.

Since Game of Thrones ended in 2019 the bugle cry of the Internet has been whether a new show will come along and against all great odds temporarily unite enough factions of disparate media platform viewers to adopt it, the closest we will ever come again to a monocultural decision.

From recent hype the latest hope is The Mandalorian. Wisely offered as bait to Disney + ‘s streaming service debut enough people bit to mark both a (temporary) success. What other new series has garnered such attention, from memes to blogs to print? The swell was not unprecedented, yet the excitement generated seemed organic. Thankfully it seemed beyond Disney’s control, beyond their marketing.

Will this last? Can season 2 exceed our expectations? Who knows.

Here are 8 reasons why season 1 was so rewarding(not listed in order of importance):

1.NO ARCANE KNOWLEDGE OF THE STAR WARS UNIVERSE NEEDED 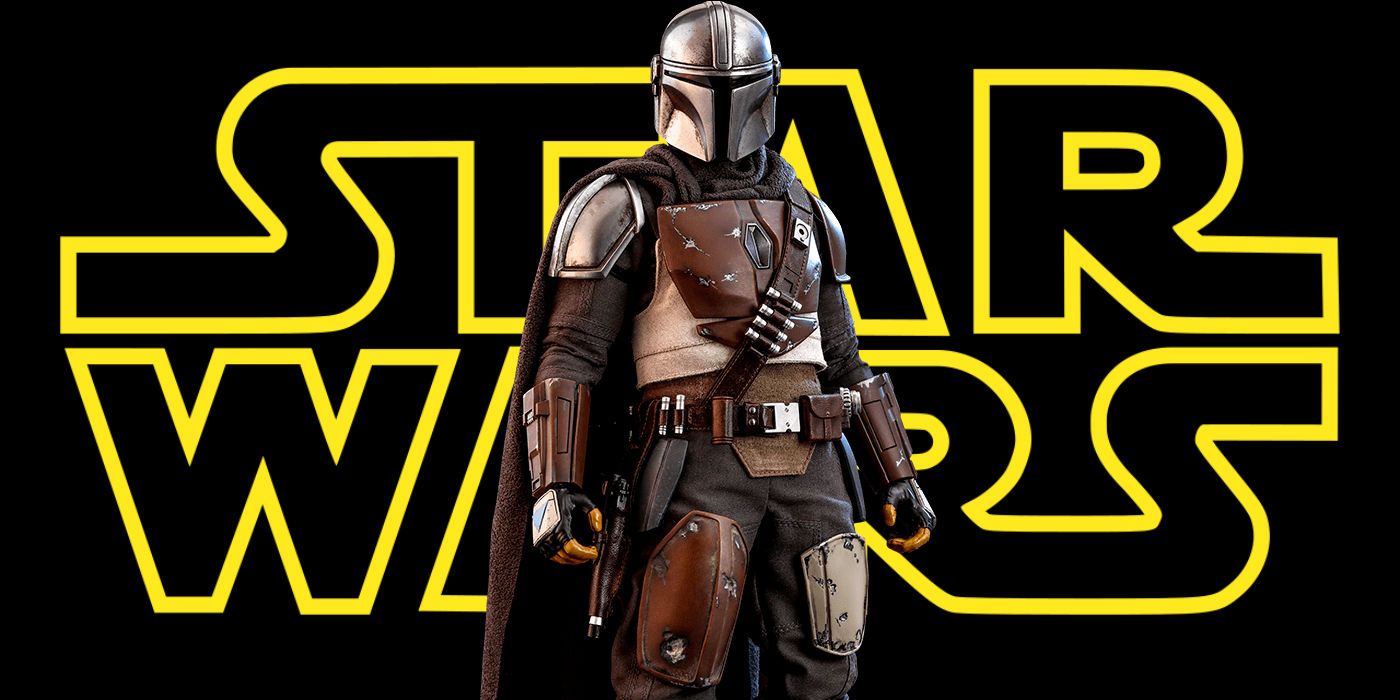 The curious need not consult a website Star Wars lexicon before committing to the series. Exposition was kept at a reliable minimum. Yes, the experience may be richer if you understand where The Mandalorian occurs on the Star Wars “timeline.” For those folks the series must abound with “Easter eggs.” For the rest of us, with a general knowledge of the original movies, of the jargon which has reached general pop culture literacy (lightsabers, “The Force,” “The Empire,” et al) that’s enough to enjoy what is essentially a space-age Western. I haven’t ‘ seen a Star Wars movie since The Phantom Menace  and I loved every minute of The Mandalorian.

The longest episode was around 45 minutes, but most clocked in north of a half hour. This executive decision had benefits which were more than economical. It actually rewarded a reduced attention span. The stories rarely dragged. Compressed time limits allow for more viewer focus and emotional involvement. Digression has its place in the arts. Sometimes a winding story is like a leisurely trip upstream in a steam boat. Other times you feel as is you are strapped to the shell of a tortoise traversing a continent.

Harkening back to the golden age of television and movie serials, The Mandalorian revived a storytelling narrative “long since abandoned”(to borrow a phrase from Bob Dylan). Buck Rogers, The Lone Ranger, Batman, Superman et al used this format. Yes, it’s formulaic–but only if you have been exposed to the method. I have a hunch that many younger viewers of the series have not, so the decision to revive it is a brilliant touch. The cliffhanger serial has been out of vogue for so long that it might as well be new again.

4.THE VISUAL PORNOGRAPHY OF TECHNOLOGY

As with the James Bond films, every science fiction project has to up the ante with its latest gadgets. Learned audiences become jaded over time. “Light saber?!? I’ve seen that.” How about a double light saber. What ups the ante is that filmmakers have to up the ante on every outing. Exposure to technology–as with pornography–dulls the senses over time. Only new innovations(or new scenes, new starlets) reinvigorates interest. 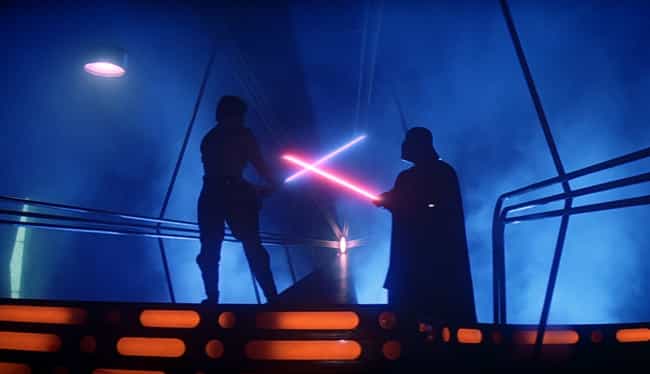 The Mandalorian understands this cockamamie theory(pun intended), unveiling a cadre of new weapons and warfare techniques which are mindboggling. 5.THE ACTING GOT OUT OF THE WAY & THE CAMEOS WERE EYE TURNING

No one watches science fiction for the damn acting. All the audience requires is adequacy, a general level of competence and believability–since so often they are acting against a green screen months before the CGI is added to the scene. The acting shouldn’t be stiff and embarrassing, yet the audience doesn’t wish to be distracted from the action. Honestly I have no idea what Pedro Pascal brings to the lead role, since he remains encased in a helmet and body armor for all but one crucial scene in the series. Could another actor improve upon the line readings which are delivered through some type of vocoder? Perhaps. Truthfully he lacks the oratorial  gravitas James Earl Jones brought to Darth Vader in the original movies, which helped make that character iconic. But watching Pascal as “Mando” never has me yearning for another actor to replace him. I don’t mean this as damming praise but he’s better with silent displays as communication than the verbal ones. 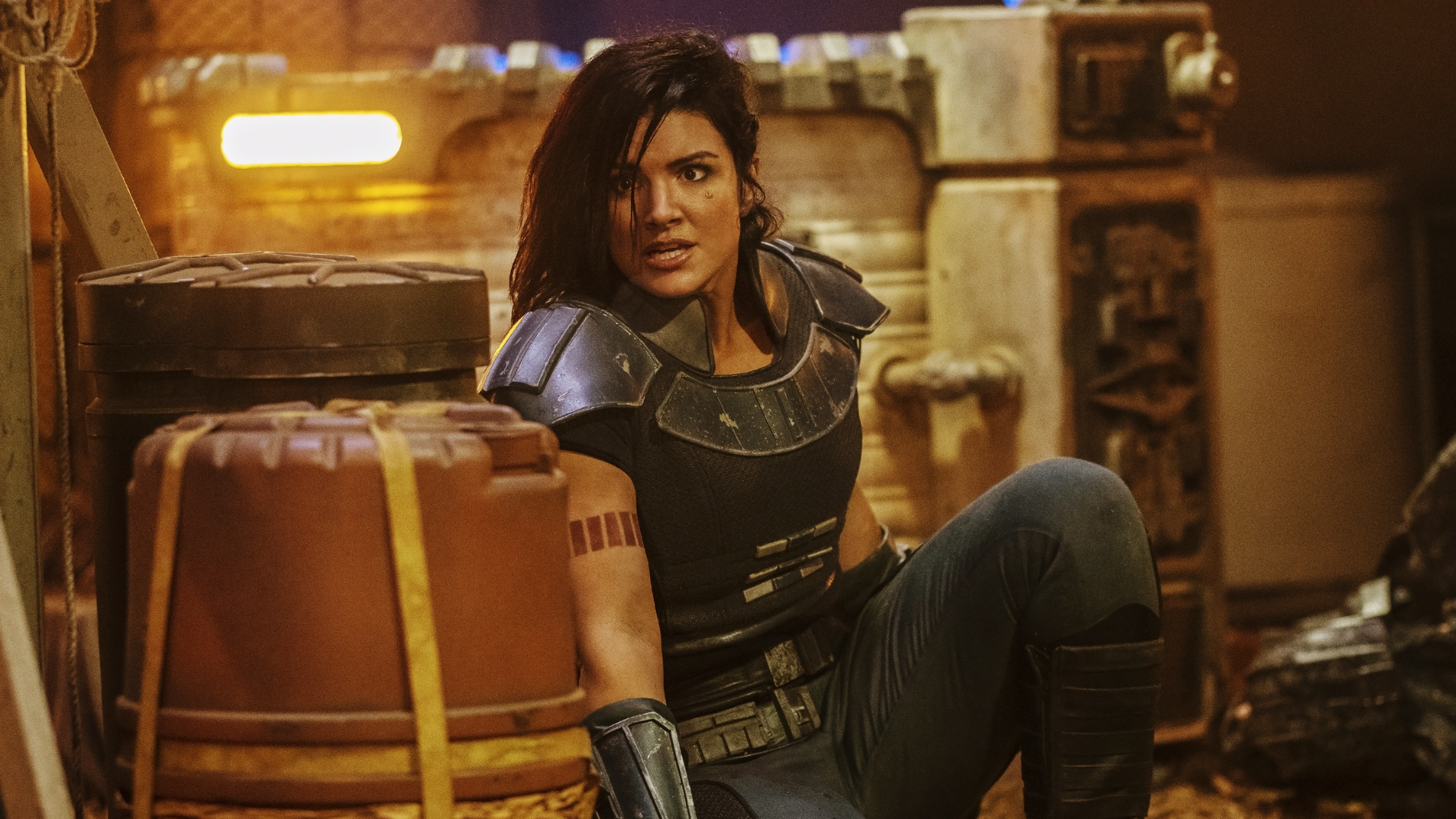 The cameos are another matter, lending the series more actor-ly charisma. The hulking beauty Gina Carano–a MMA star and fitness model turned actor–succeeds expectation as Mando’s side kick, a fellow mercenary. Since the beginning of cinema filmmakers and audiences have been fascinated with those who deliberately set out to modify the human body, to expand its anatomy, including ways which might be considered freakish:  bodybuilders, boxers, wrestlers. From Rocky Marciano to Arnold Schwarzenegger to Hulk Hogan, the most charismatic from the world of athletic competition are ferried over for the audience’s approval.

Carano is the first woman to be given such a “push” to mixed results–until now. Perfectly cast as a rebel shock trooper(whatever the hell that was, for us non-Star Wars newbies), she exceeds expectations. Of course her physicality is unbelievable, but her line readings are delivered with far more savoir faire than Dolph Lundgren or Jean-Claude Van Damme bother to muster. She’s an unlikely star in the making. Try to take your eyes off her.

I tend to find both Amy Sedaris and her “humorist” brother David insufferable(especially him–she at least has a few charms), but her comic turn in episode 5 “The Gunslinger” causes me to reaccesse my opinion.

It’s nice to see Carl Weathers again, anywhere, much less a recurring role. The Mandalorian series has “rescued” him in a similar way that Quentin Tarantino “rescued” Robert Forster in Jackie Brown. Weather looks like he’s having the time of his life, while his weathered handsomeness and aging swashbuckler bent adds compelling layers to his role as the head of a bounty hunter’s guild.

But no cameo in recent memory trumps Werner Herzog as “the Client.” He is not the first director of note to be asked to appear in some one else’s films. Fritz Lang appeared in Jean-Luc Godard‘s masterpiece La Mepris(Contempt) for example, and Steven Spielberg pegged Francois Truffaut–a father of the French Nouvelle Vague–-for a significant role in his sci-fi epic, Close Encounters of the Third Kind. But to those in the know the idea of Herzog–who has stated he had never seen a Star Wars film in his life–acting in a Disney production is worthy of some intellectual’s version of a “Saturday Night Live” skit. Practically the last of the European directors achieving world-wide recognition who began filming after World War II, his art-house vision of cinema has been so personal and pecuilar, so feverish it betrays no comparisons. Furthermore among auteurs he’s also been one of the great raconteurs ever to be interviewed. He’s a must watch/a must listen because his opinions are strikingly his own, oscillating between a meditative eccentricity and the Sturm und Drang of full blown madness.

These latter qualities are brought to the first and last episode of The Mandalorian. Delivered in his trademark German-accented sotto voce, in attendance with the permanent scowl upon his face, backed up a dozen or more Stormtrooper bodyguards the character lodges in your brain like no other. For a series that abounds with evil men “the Client” is first and foremost. Like rich men from the beginning of time, he barely has to move in order to effect the outcome of the universe. He is judge/jury/executioner, an evil Buddha.

Wit. Dry humor. Gags. The Mandalorian had it all. But one clip had me nearly falling off the couch:

The breakout star of 2019, whose presence made each episode a must-see.

The old Van Morrison song title kept coming back to me as I watched and rewatched these episodes. The delights are not cerebral. There’s nothing Jungian here, nothing which can be seen as a statement of America or the world. It lacks all the deep themes the first seasons of The Sopranos, The Wire, Breaking Bad, Mad Men and Game of Thrones generated. And unlike those selections I don’t think it transcends the limitations of the genre its enclosed in. Game of Thrones quickly demonstrated it was beyond the “sword & sorcery” ghetto others might have relegated it to based upon the first light of superficial observance.

Instead what The Mandalorian gifted me with was a childlike sense of wonder. an awe of what unfolded before me. Melting hardened defenses, this octet of linking episodes were a warming spectacle, a reminder of the vibrancy of the lowly “popcorn” thriller raised to the highest heights. Whether or not it was as “profound” as those other great, great shows I enjoyed it nonetheless. Its entertainment value could not be ignored, nor its warmth and heart. Not bad for a show about a glorified bounty hunter and a little muppet.

0 Replies to ““A SENSE OF WONDER”: 8 REASONS WHY THE MANDALORIAN SEASON 1 WAS SO SUPERB”