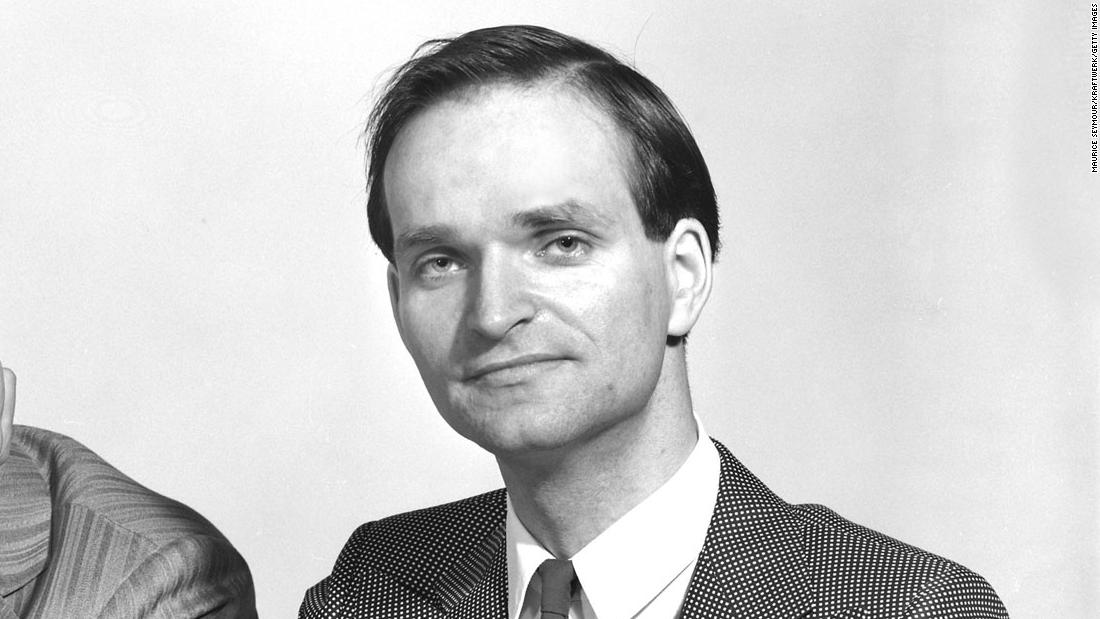 MOURN THE MAN, MOURN THE MACHINE. THE ANTI-“ROCKIST” CRITICS LOVE TO advance a hoary position that Kraftwerk were not only comparable to The Beatles but have been more influential. This is more than off the mark, an indictment of their views but never a shot at Kraftwerk. 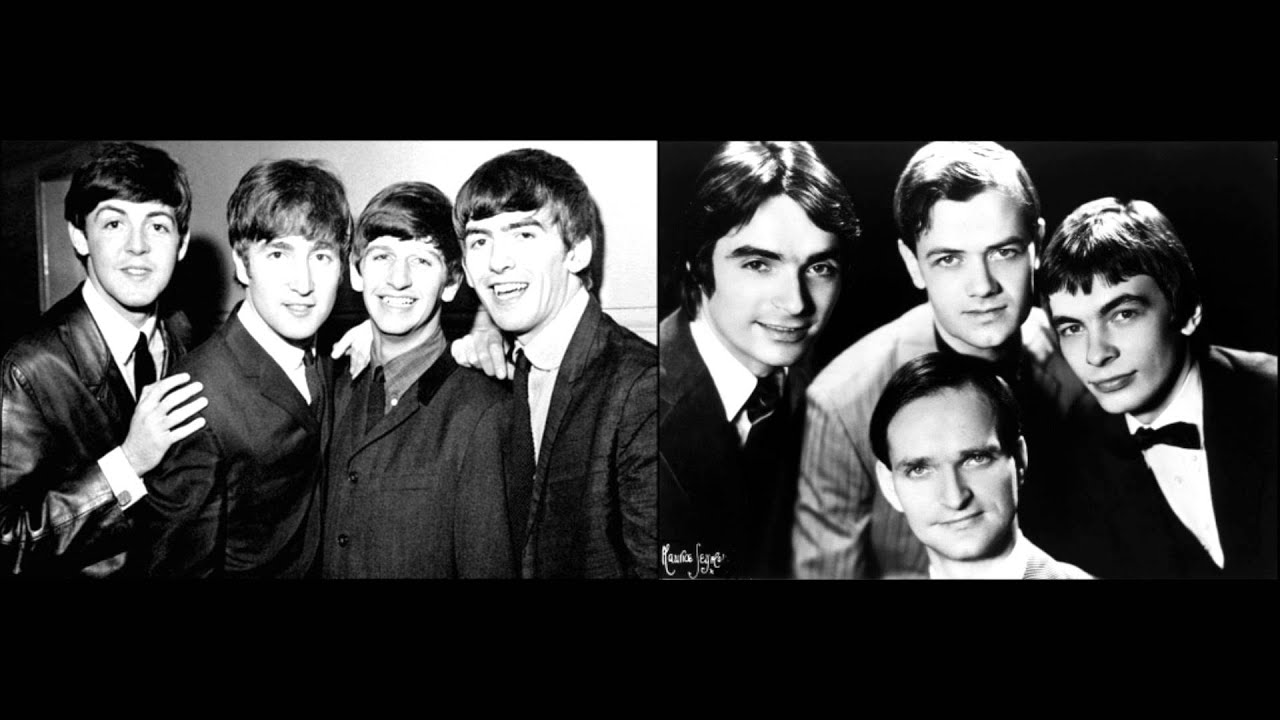 Kraftwerk is less like The Beatles and more like the Velvet Underground. During their commercial heyday they never achieved the critical nor commercial consensus of the band from Liverpool. They have always been at the status of cult artists. 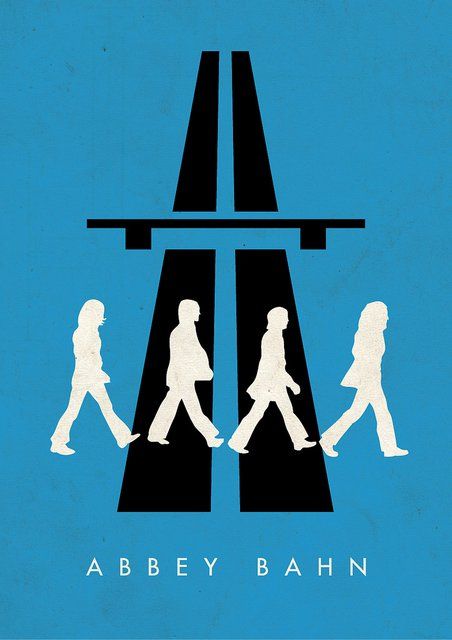 Was it Brian Eno who once famously quipped that few people bought Velvet Underground records, but everyone who did started a band? The same is true for Kraftwerk, but with an added twist. For it seems like everyone who heard a Kraftwerk recording not only started a career as a musician or producer, but were then instrumental in spawning and cultivating a significant movement(art rock; disco; techno; house; hip hop; electronica; EDM et al) which has lasted for generations. The critics unneccesarily trumpeting Kraftwerk over The Beatles are right in this regard, celebrating their much ballyhooed notions of “diversity.” To their perpetual astonishment that enough Black people could rise to appreciate a quartet of Eurocentric Germans is–pardon the pun–beyond the pale. 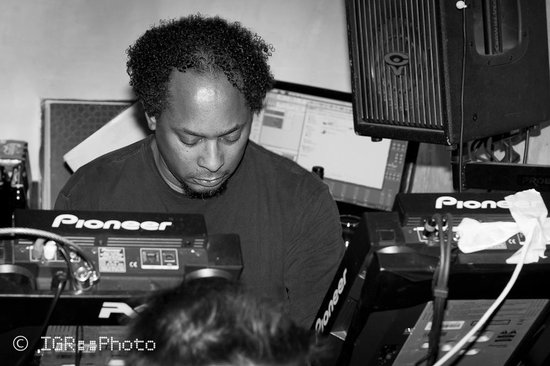 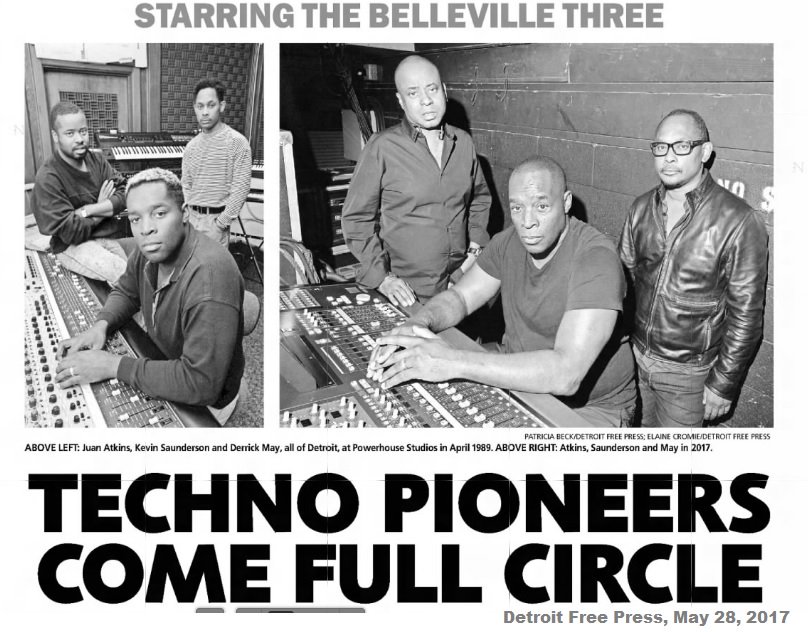 Too often stories about Kraftwerk lose Kraftwerk in the process. Endless words about their influence on everyone from Brian Eno and David Bowie to Derrick May and Afrika Bambaataa, but very few devoted to their musical evolution and participation. It wasn’t Techno which made Kraftwerk relevant, Kraftwerk is relevant because they have always been Kraftwerk. 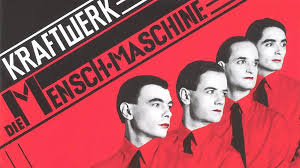 How did  band go from the interesting “false starts” of the first few atmospheric albums–which have more to do with ambient and jazzy gestures–to the synthetic unit beloved by generations? It was more than jettisoning guitars and flutes and cutting their hippie-length hair. 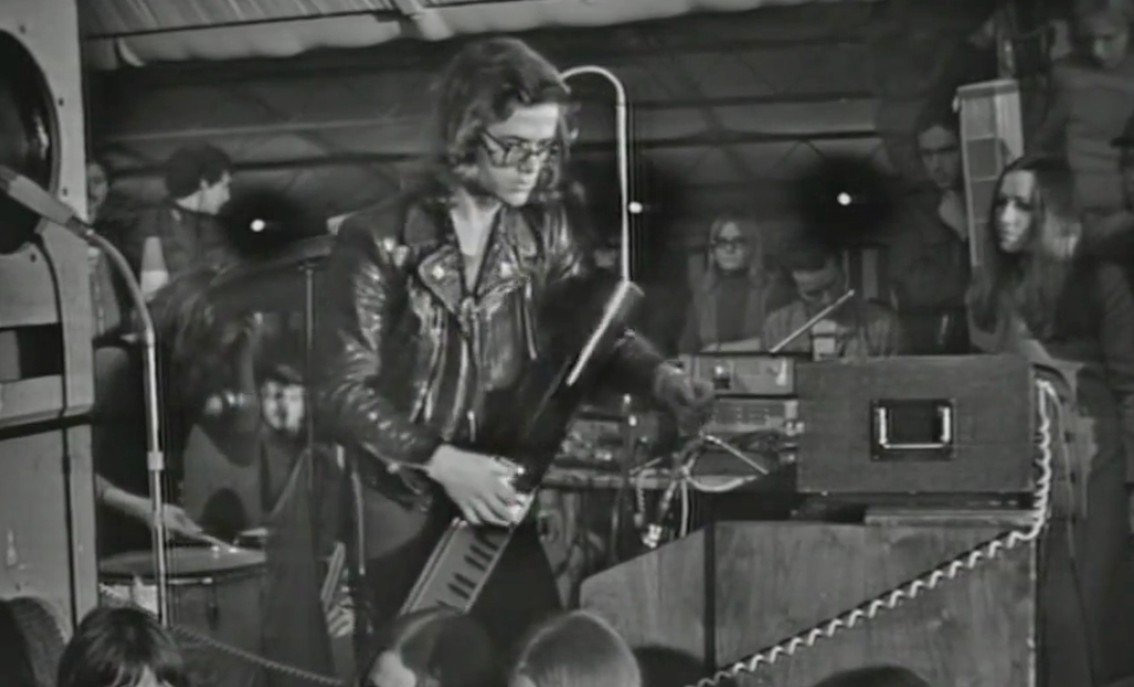 Has anyone else suggested Kraftwerk mirrors Steely Dan in that they too found their sound and purpose by eliminating permanent band members and reducing to a more manageable duo? The earlier Steely Dan albums are far less of a shock because Donald Fagen and Walter Becker quickly emerged as joint auteurs, wise-asses joined at the hip and sharing the same brain. Dan began as a more traditional rock band only in form, yet the acerbicness of Fagen/Becker was evident from the first song on their debut album.  Ralf Hütter and Florian Schneider needed longer to gain artistic momentum.

There’s a fabulous German word called Weltanschauung, or world view, which is discernible in the work of a philospher or an artist. Kraftwerk became Kraftwerk by embracing a triple manifesto. They would not dodge the collective past and while they were in the present they would begin looking toward the future.

Although Hütter appeared to be the front man for the quartet(a rotating door of musicians would begin to fill out the ranks), by all accounts behind the scene this new Weltanschauung was borne of Schneider’s meditations. Under his direction Kraftwerk was defiantly German yet, more reminiscent of Nietzsche’s writings, they were also pro-European. They celebrated their heritage responsibly and without provoking controversy, while impressing that to be a good German was also to be a good European. This pan-European ethos dominantes the second phase of Kraftwerk, from their album covers and musical promos to their lyrical celebrations of the Autobhan or the Tour de France. 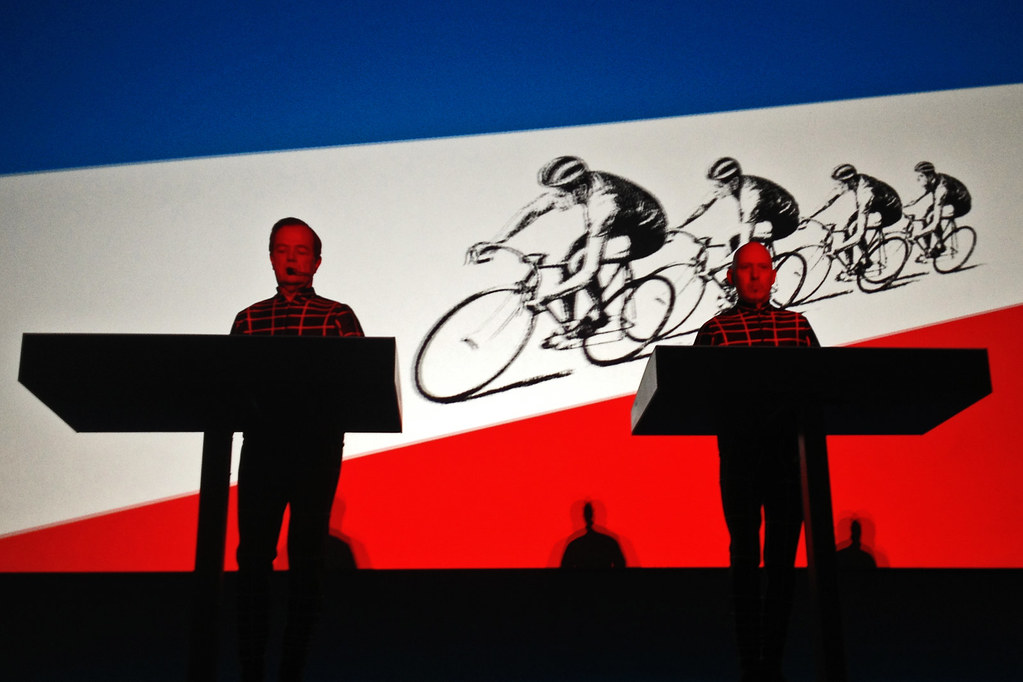 Yet while they were posing in everything but leiderhosen, Schneider, Hütter  and their collaborators were sculpting futuramas with the latest generations of synthesizers and drum machines.

By pursuing their own singular path Kraftwerk inspired not only their peers but generations to come. They became the soundtrack of the future, or one of them, Certainly one of the more dominant ones. And Schneider collaborated with Hütter on that vision. 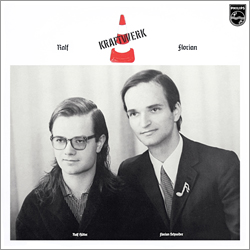 To be fair Kraftwerk were not alone during the Seventies in exploring the expansion of music via the synthetic. Their peers include the likes of fellow Germans such as Tangerine Dream and the “Japanese Kraftwerk” of Yellow Magic Orchestra, Jean-Michel Jarre as well as Giorgio Moroder and Brian Eno. 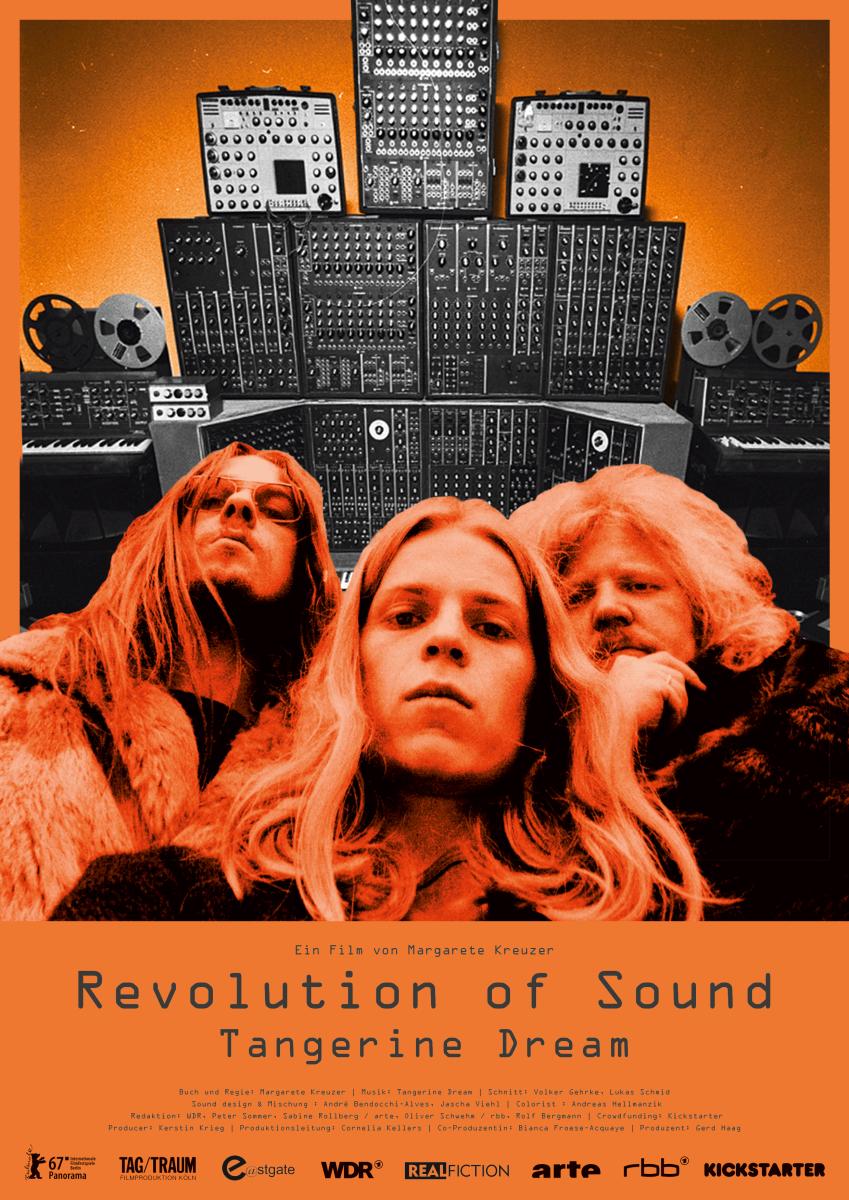 Yet what advanced Kraftwerk to the head of influences is songcraft and not abandoning a good melody, in this manner Hütter and Schneider were reminiscent of Lennon and McCartney. Just as The Beatles were not the first rock and roll band, nor the first one to write some or most of their own songs, Kraftwerk were not the first of their kind. But as with Lennon and McCartney, Hütter and Schneider were more capable than their peers of constructing indelible melodies which resonated beyond their circumstances.

In other words what they wrote was catchy.

Perhaps for Hütter and Schneider the words were not as important as melody and arrangement. The Beatles were an extension of Tin Pan Alley, Kraftwerk was not at all confined to it or expanding from it. If men wrote songs, machines executed programs. Kraftwerk’s evolution into transhumanism eliminated the guitar, flute and other “real” instruments, yet not the melodies those instruments could produce to delight the ears of listeners. Whether men were playing the machines or had submerged into the matrix uniting man and machine, melody had not been eliminated from the equation. The emerging sounds were novel and evocative of new frontiers, yet were curiously reminiscent of music boxes and celestes from the past. Whatever future Kraftwerk envisioned, they could not conceive of a world minus the consonant pleasure of melody. Even for robots and cyborgs. 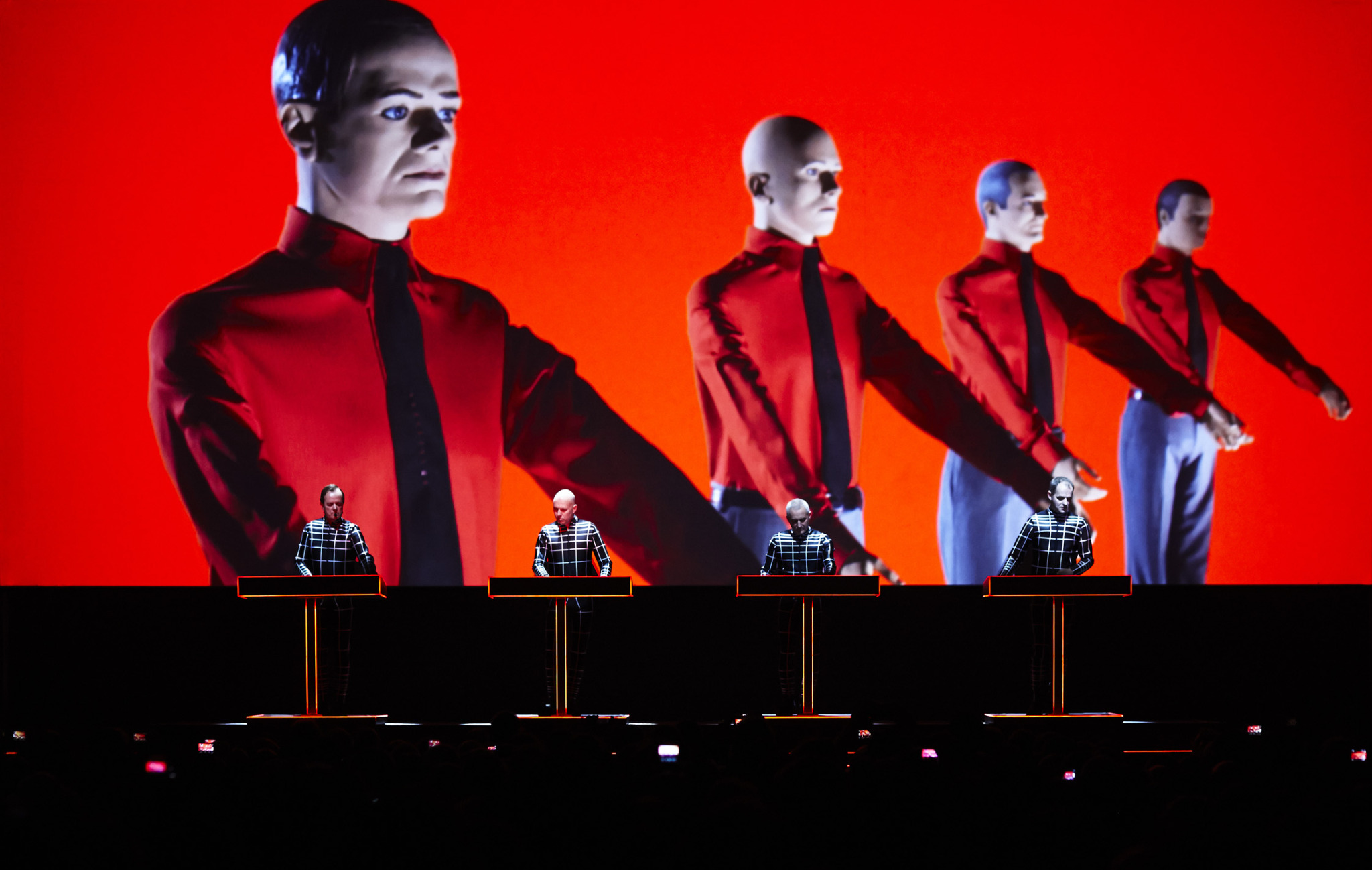 Kraftwerk continued after Schneider’s retirement in 2003. Their studio albums subsided but under Hütter’s direction they began to tour the world with more frequency than in past decades. There is no corollary of why Kraftwerk became even more popular and respected after his abscence, yet Hütter became the de facto focus of the group and commonly elevated to the level of genius and legend by critics and the expanding fan base. History rewards participants not those on the sideline. And that Hütter so rarely grants interviews amplifies these claims, regardless of merit. It didn’t help that when Schneider briefly stepped out of retirement to release a pro-conservation single benefitting charity(“Stop Plastic Pollution”) the aesthetic results were not encouraging. No matter how sincere the message, it clunks like a Saturday Night Live parody of a Kraftwerk song, of music from the old “Sprockets” routines, which ridiculed German “stiffness.”

Did it diminish Schneider’s legacy? Probably not, but it added creedence to the faction which believes that Hütter is the one-man band, the voice which always mattered with Kraftwerk.

Honestly I had never heard of the song until after Florian Schneider’s death. After first listen I was saddened and greatly disappointed. I wish he hadn’t released that, I thought to myself, a confirmation of my idea that those who retire should stay retired.

“Stop Plastic Pollution” does not improve when I listen to it again. Yet I am happy to hear it. It’s like a clunky mechanical firefly wobbling through the noir skyline of a Philip J K. Dick dystopia, such as Do Androids Dream of Electric Sheep? It makes me feel like Decker always yearning for some memento of the previous natural world denied to him and others in their near apocalyptic age. 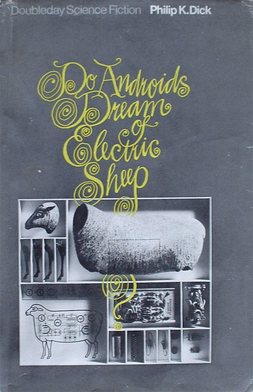 That Schneider released it apparently minus any self-consciousness, without any editorial verve both saddens and amazes me. It’s mediocre, not quite terrible, unintentionally campy. Yet those bleeps and the flatness of his voice are also ghostly reminders that he made better music which I can also return to.

Most great pro athletes rarely exit their game in the most graceful manner. Think Willie Mays. Think Brett Farve. Musical legends are hardly any different. Yet their foibiles reminds us that they too are human, all too human. And maybe their weak exits only makes us appreciate their achievements all the more.

Florian Schneider, thank you for your music and vision. Rest in peace.