SO GAME OF THRONES “FANS” HAVE apparently been “triggered” by HBO’s decision to release a “posthumous” recap trailer from Season 8:

Posthumous because the series has been over for nearly 2 years. Ostensibly the move was to announce that season 8 is now streamable and to celebrate the upcoming 10 year anniversary of the show, yet the decision is indeed curious.  Why only Season 8, which nearly all fans are still decrying to this very day on Reddit as the very worst ending for a great show in the history of television? Why not a long trailer combining highlights from all 8 seasons?

I don’t suspect the folks at HBO are tone deaf nor that they are unaware of the visceral backlash to the series swansong. My unsubstantiated hunch is that a cadre of these folks secretly delight in once more riling up the “anti 8” crowd, who have become more obnoxious, childish and unlikeable as time has passed. Maybe it’s good for business(see HBOMAXPLUS).

I’ve written before about my growing distaste for the sub-reddit groups dedicated to GOT and their sense of “outrage”(and to be fair I have a subscription to a few). I joined 2 years ago when I joined Reddit because I dearly missed the show, but since have become largely disgusted with my decision. The old Groucho Marx line about not wanting to be part of any group which would have me as a member came back to me in spades.

The problem with the sub-reddit Game of Thrones fanatics is that they of course epitomize all the tropes of millennials that non-millennials have become exasperated with: the sense of entitlement; the need to be “outraged” by everything; the “cancel culture” mentality, to silence and ignore what not only offends them but refuses to cave to their collective worldview; the expression of thoughts via memes and so forth. Some twenty year old  still whining because Bran won the Game of Thrones and not Daeneryrs, even in the context of pop culture, is so absurd it takes navel-gazing and “privilege” to the nth degree. Every day feels more like a trail run for the Apocalypse and some dopey over-privileged(and usually white) First World idiot is worrying about the fucking “Iron Throne “in 2021?!? 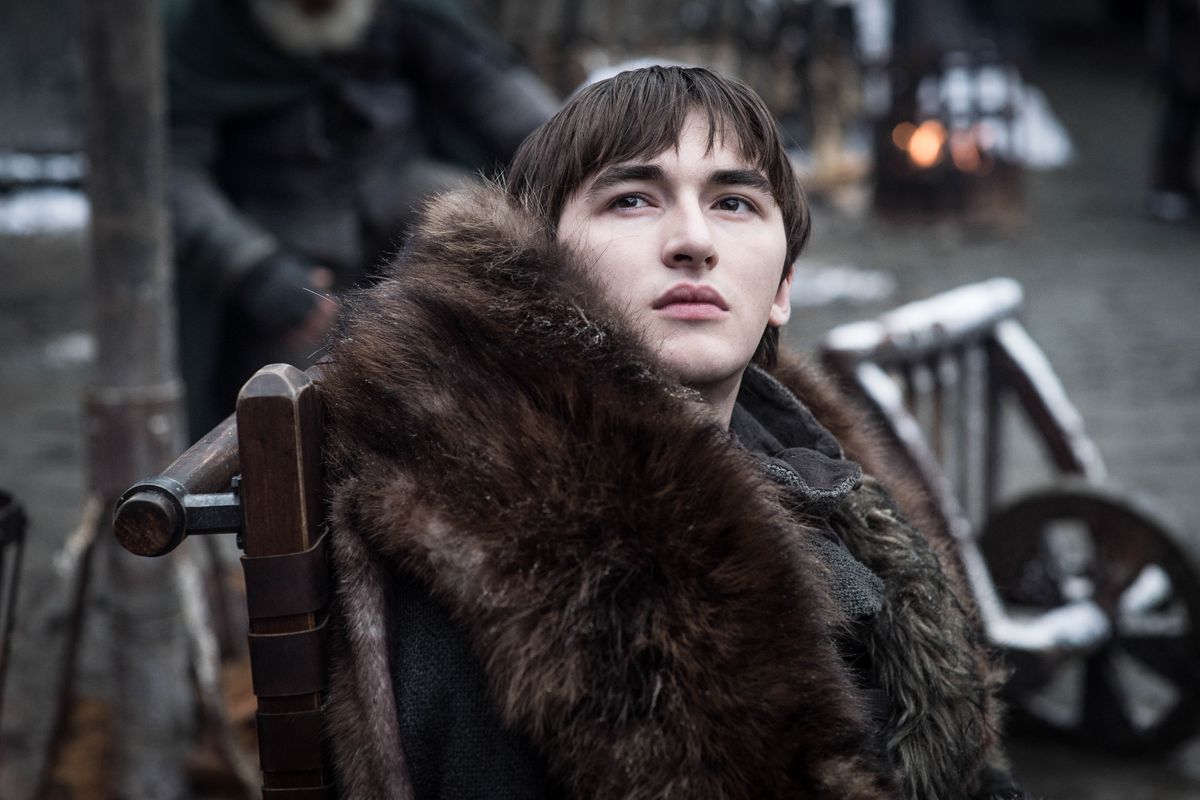 Yes, I know someone can have a sense of humor and mirth and that one doesn’t have to be dour all the time.  That one can be concerned about current events—and what do the Weirwood trees really want. And I’m very aware I’m pushing a damn website devoted to pop culture, not politics.  Maybe the hypocrite doesn’t fall too far from the: 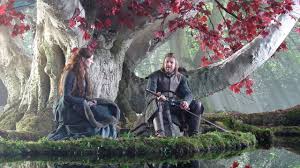 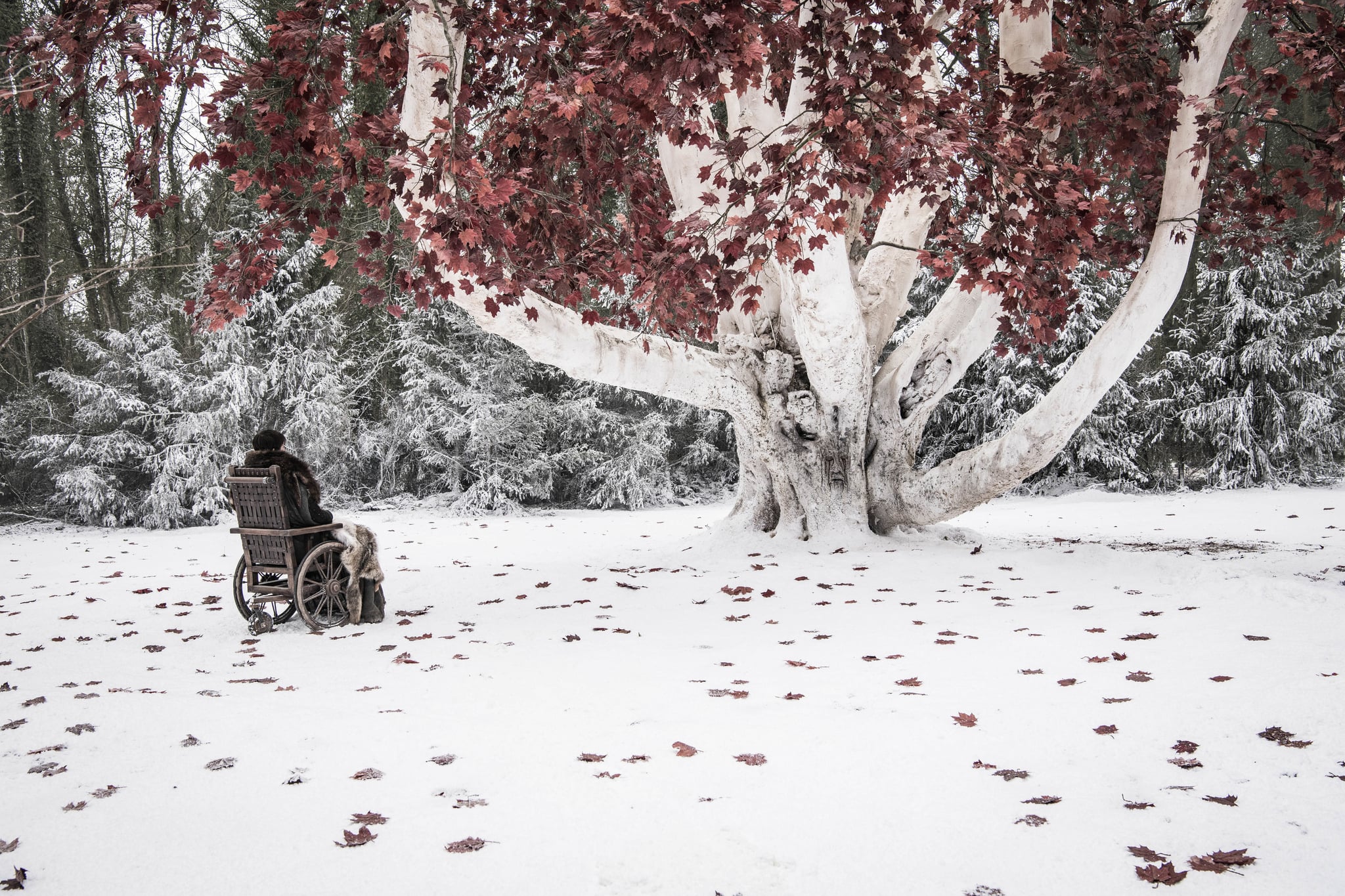 Granted it’s a dismal failure in all facets of cinematic storytelling save for acting, special effects and cheap suspense. The greatly despised showrunners “D & D”’s decision to truncate the final season to six episodes so that they could rush off to greener pastures created a titanic navigation before the season even began. One questionable shortcut after another was a real disservice to a show which previously had not been afraid to strategize plot twists over several seasons with novelistic precision.

I will give sub-reddit contributors credit for illustrating how stupid once very bright characters became overnight in Season 8(Tyrion, Varys, et al). All the characters seemed to be operating with amnesia of enough past events, which extended to the showrunners. The audience was not expected to notice troubling disparities of logic(how the hell did Daenerys and her two dragons not see the renegade Iron Bound fleet creeping up on Dragonstone? doesn’t it take more than a fortnight to reach Kings Landing from Winterfell? And how in the bloody hell were there enough Northmen, Unsullied and Dothraki troops after being surely decimated in the Longest Night to march anywhere, much less be prepared to siege the capital?!? How many of the Dorthraki calvary–the front line used in an irresponsible lunatic fashion– could have survived the absolute massacre at the hands of the Army of the Dead?) “The Longest Night” has some of the stupidest military “strategy” ever created for any fictional medium. There are must see Youtube critiques like this and this which eviscerate the episode from pillar to post.

But the chief [[obbrium/peak]] of the collective scorn are of course the last two episodes, “The Bells” and “The Iron Throne.” The former can be boiled down to Daenerys and dragon burn down Kings Landing after she promised not to.

The latter to Jon Snow aka A. Targaryen kills the Mad Queen and then the last dragon literally and symbolically destroys the Iron Throne. 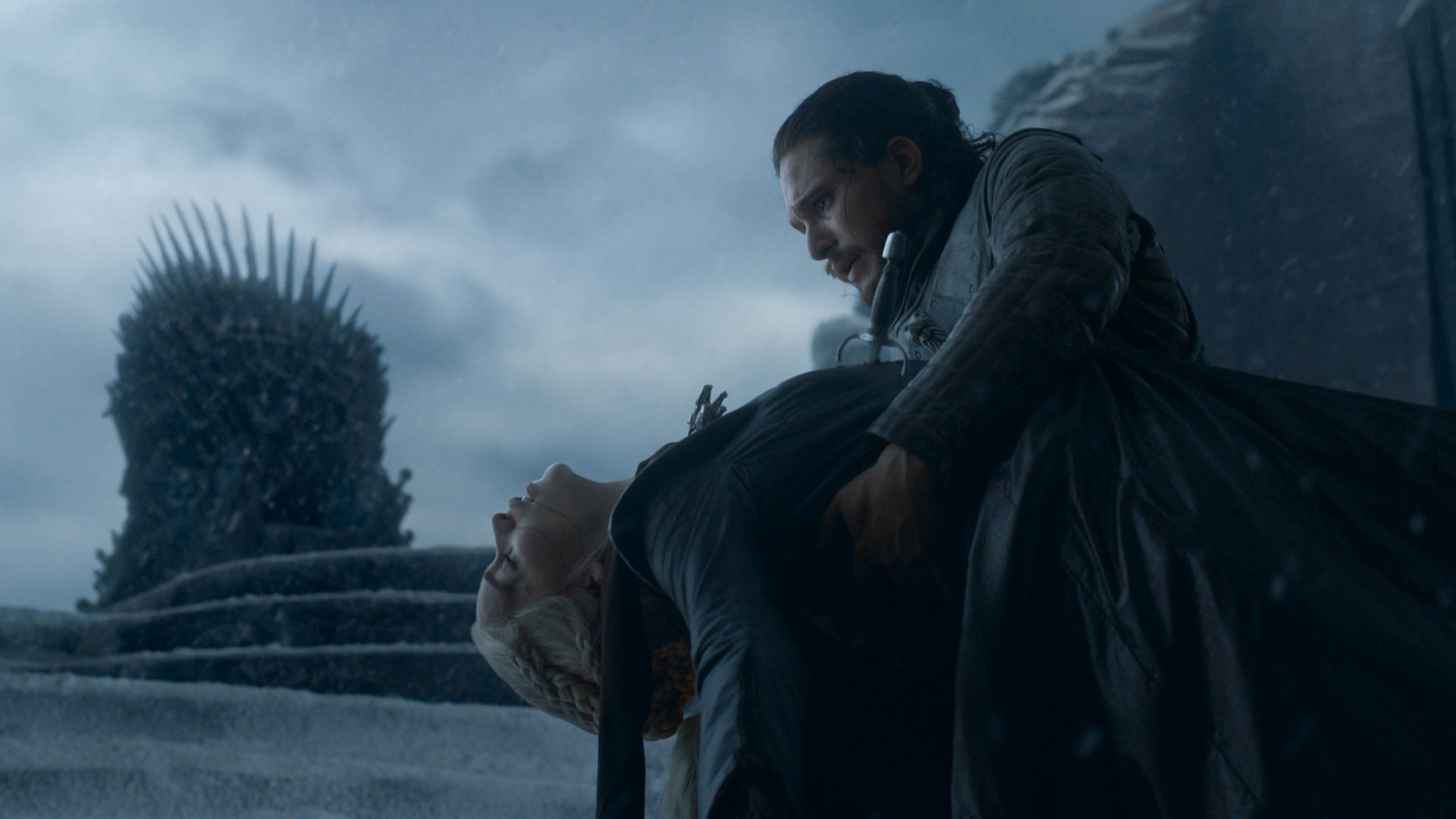 The great rise of fan revolt about Season 8 continues to this day to be about the fate of Daenerys. Was her third act character arc ultimately misogynistic? Were the tragedies a predetermined echo of her family’s tragic histories? A combination of both? Lazy storytelling?

So why do I still find even Season 8 so engrossing? Why the irrational bent? Why am I not so incensed that my favorite show of all time ended so poorly? The baby and the bath water metaphor?

Call me sick and delusional but there is something fascinating about Bran becoming king. Is Bran analogous to Plato’s “philosopher-king?” How does an oracle govern? The Grecian nature of the equation fascinates this philosophy major dropout. This unexpected development, completely unpredictable(and unprecedented) perversely intrigued me, more than “conventional” endings with a predictable character ascending to the throne. 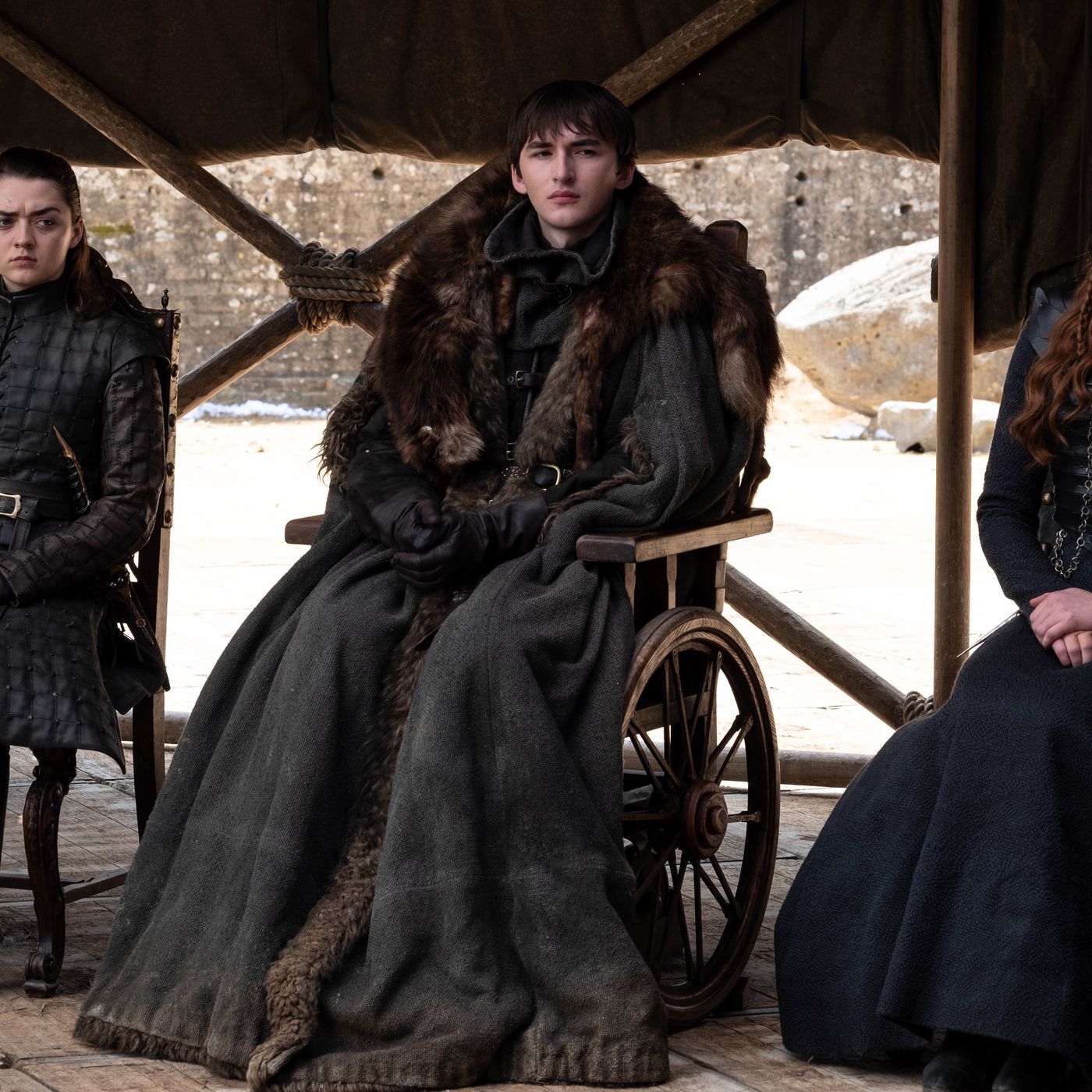 Granted I am of the extreme minority about this. But your views are YOUR views and mine are mine.

I will hold that the epilogue of “The Iron Throne”(the real “Last of the Starks” minus Bran)is among the most beautiful of all sequences from the show. It’s symmetry is perfect, a psychological yet visceral summation which rewards those familiar with the characters and hints at mysterious and more satisfying storylines possibly to come. I love it so much, have rewatched it so many times that I can almost absolve D & D of that bonfire of the vanities known as Season 8. Almost.

If the above metaphor is not obvious: the baby is the show, from season one to the first half of season 8. The bath water is season 8, the dumber elements of “The Long Night” included. Why turn so completely against a show where the acting was so superb from beginning to end? Why feel betrayed? Even with the vapors of Season 8 irritating my eyes and inducing a migraine, the greater echoes of the show continue to haunt me with a far more satisfying and overwhelming power. This is why I am still rewatching my favorite bits here and there on a depressingly frequent basis. Why I am saving to buy the Blu Ray edition of the show.

And why I may even one day read the actual books from which the show sprang forth, like gods and goddesses from the head of Zeus. Or in this case George R.R. Martin. And I normally dislike reading fantasy and /or science fiction.

The King is dead. The Queen is dead. Long live the King(even if he is Bran)!